Exhibit “Revolution of dignity and ATO: Sumy dimension” dedicated to the fighters for freedom and independence of Ukraine 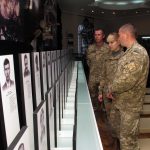 By the 25th anniversary of Independence of Ukraine Sumy Regional Museum has created a permanent exhibit “Revolution of dignity and ATO: Sumy dimension” dedicated to the fighters for freedom and independence of Ukraine. Based on the collected museum items and materials about these events at the museum during 2014 – 2016 was established and opened a permanent exhibition. According to the measures of culture and tourism department of Sumy Regional State Administration on its base in one of the largest halls of the museum, designed by the creative team of its employees and workshop of museum projects A. Antontsya deployed a permanent exhibition-installation – the most complete in the Sumy region. Together with the military, police officers, participating in ATO, volunteers and museum staff as a result of communication with participants, family and fellow of fallen heroes, the museum established Monuments Fund and photos archive, depicting the events of the Revolution of dignity and Sumy citizens’ participation in ATO. This made it possible to create exposure.

Its first section highlights Sumy citizens participation in the events of the Revolution of dignity in city of Kyiv and Sumy, represents materials about Heavenly Hundred Hero – Hero of Ukraine Sumy citizen Oleksiy Bratushka.

Central place in exhibition takes museum installation “Heroes do not die” – a symbolic Memorial Wall of Remembrance, which contains photos and biographies of Sumy 123 warriors who sacrificed their lives for independence and territorial integrity of the motherland. 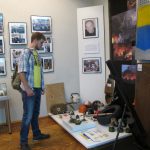 Certain section of the exhibition is about the 27th artillery brigade and its military involvement within the area of ATO, courage and military skill of its personnel. It commemorates fallen soldiers of the 9th battery. Personal items of Lieutenant Mykola Osipov, both fighters and brothers Yuriy and Volodymyr Dudok, Ihor Zaval’nyy, spall attacks from the blast site are exhibited.

A separate section of the exhibition includes photographs, documents and samples of military equipment produced for the needs of ATO soldiers that represent the activities of Sumy volunteers, united, particularly in the PO (Public Organization) «Sumy» SWB (Sumy Women’s Battalion) «Tyl», «Kulinarna sotnya» and so on. 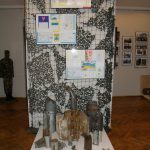 On a background of museum installations of camouflage netting children’s drawings are shown, that were given to the soldiers in the ATO zone. They are like unique talismans, the theme of which are love for Ukraine and its advocates, hope for victory and peace. And nearby visitors can see “war metal” – fragments of Russian missiles «Smerch», «Uragan», «Grad», guns, mortars, which were collected by the Ukrainian positions.