From the history of the Sumy Regional Studies Museum 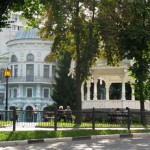 The idea of creating a museum in Sumy originated in 1918. A special commission began collecting art and historical treasures, mostly from landlords’ estates and wealthy houses.  March 1, 1920 Nykanor Onatskyi (artist, art critic, poet and social activist) was appointed as a director of the art and history museum. In July 1920 the art and history museum received a building of a city merchant and mutual credit bank situated on the Shevchenko Street. N. Onatskyi launched activities to increase the museum’s collection. Eventually except for the building of the city bank, the museum received two adjacent premises.

The working conditions of the first museum staff were extremely severe:  the museum building was not heated and there was no salary paid during 11 months of 1922. The situation improved only in 1925, when the museum premises got heating, and the means to purchase exhibits and museum work were earmarked.

Since its establishment the museum had both artistic and historical profile.  According to the information given by N. Onatskyi in the brochure “Seven years     of Sumy museum” 3333 of 10,279 exhibits, or nearly a third, carried  a historical nature. They included: archaeological and historical items (2170), ancient weapons (58), materials on the history of sugar refining (373) and others.  N. Onatskyy actively collected ethnographic, historical and local lore materials,  as well as Shevchenko materials. For that end he organized search expeditions and was a permanent participant of those.

Already in the early years of the existence of museum they organized exhibitions on historical topics, including “History of the Book”, “History of Printing”, to Shevchenko days they devoted exhibitions of archaeological artifacts.

December 31, 1931 N. Onatskyi resigned from the position of the director of the museum and soon moved to Poltava. Even then, the clouds of accusations of anti-Soviet activity accumulated above his head. In September 1937 N. Onatskyi was arrested,  in November of that year was shot out.

January 10, 1939 Sumy region was formed, and on March 15t hey decided to establish two museums: art and local history ones at the premises of Sumy Art and History Museum.

During World War II museum artifacts remained in Sumy. On September 30, 1941 one of the museum buildings was hit by a bomb. Museum employees had to seek out items in ruins. Specifically, November 5, 1941 they found and returned to the Sumy Holy Transfiguration Cathedral miraculous icon of Korsun Holy Mother, seized during the persecution of the church and other religious items. The surviving pieces were transported to the house on 16 Mykolaiivska Street.

Sumy occupying authorities captured by the Nazis in October 1941 gave instructions to reactivate the museum. They arranged exhibition called “Ukrainian folk art,” which exhibited blown glass and objects of everyday life. In general, the museum activity has been reduced to periodic exhibition of works by local artists. Retreating, the Nazis took off in their hands many exhibitions items and burned the museum building.

A few museum-importance items were well-preserved here. Mainly they were archeological materials, bones, coins, odd units of a pair. Among archeological items there was one of the most valuable today’s exhibits — a 2nd-4th-century wooden plow from a Tokari peat swamp in Sumy District. However, most post-fire materials were damaged significantly while documents, attributing origin of some items, were lost as well.

After the war ended, the local-history museum removed to the building of the Roman Catholic temple, belonging to the sights of the 20th-century beginning. The main task of the museum staff, consisting initially of a director and a researcher, was completing the museum stock, which was also supported by individuals, corporate persons, collective farms as well as by other post-war less damaged museums.

In 1953 the museum was provided with a house at the corner of today’s Petropavlivska Street and Pokrovska Square. Till 1917 this building belonged to the De-Konnors, a family of Sumy nobles, but, unfortunately, it failed to remain intact. In 1954–1956 a range of expositions, devoted to nature and local history from ancient to modern Soviet times, was constantly held here. It is this period when a normal museum work recovers from the war nightmare: one organizes general and thematic excursions, delivers lectures, holds school local-history circles and establishes a Battle-Fame Club whose members were veterans of the World War II. The museum started providing assistance in establishing new Sumy-Region museums, in conducting history researches and publishing their results, in completing its stock as well as in recording local-monument conditions.

In 1958 the museum jointly with the Archeology Institute of the Ukrainian-SSR Academy of Sciences began its archeological researches within Sumy Region. The first scientific attention was paid to the 4th-century Cherniakhov-Culture Sumy burial ground in Pavlova Street (1958), to the annalistic towns of Vyra (the modern Bilopillia, 1958–1959) and Putyvl (1960). Later there were archeological excavations of a Slavonic settlement near Volyntseve, a village of Putyvl District (the 1960s), as well as those of a Cherniakhov-Culture burial ground in Uspenka, a village of Buryn District (began in 1968 and lasted for several field seasons).

An outstanding event in the Sumy-Region cultural life happened in the January of 1960 when a Chekhov A.P. Memorial House was founded as a separate department of the Sumy-Region Local-History Museum. Within five rooms of the Lyntvariovs’ estate annex one created a literature-memorial exposition, reproducing the interior of contemporary times when Anton Chekhov, the famous writer, lived and worked here.

In 1972 this museum got the building into its property. It is the country council house, built in 1885-1886, situated on the Kirova street (now renamed into Gerasima Kondratieva), 2. This is one of the most beautiful monument within city history and architecture. In May, 1975, it was officially opened as the museum, consisting of three chambers: nature, local history till year 1917 and the history of Soviet society.

An important step of museum life took place in 1987, when the big exhibition dedicated to the October revolution and civil war events was opened, which for the first time showed the true and not hoax history of this region and demonstrated exhibits, previously prohibited on review. Later, museum workers staged an exhibition, which showed almost 70 years of Soviet totalitarian regime frankly.