The main museum exposition is located in Herasyma Kondratieva Street, namely in the former zemstvo-board building erected in 1885–1886. Nowadays it is one of the most attractive Sumy sights dating back to the 19th century. Within another museum building located in 2, Pokrovska Street there are two permanent expositions — Slavonic Ancient Reminders from Sumy Region and The 19th-Century Beginning.

The museum keeps almost 45000 original exhibits. Represented in permanent museum expositions, they acquaint visitors with Sumy-Region nature and history as well as with its material and spiritual culture.

A great diversity of exhibits is held in the History-Department as well where a long story is traced from the ancient times till the 20th century. One can see here unique tools, tableware, adornments, pagan amulets, arms (from the Stone Age till the Early Middle Ages). Researchers are surprised by finding here a wooden plow which was unearthed in 1921 at a Sumy peat swamp and dates back to the first AD centuries. A huge fame is also committed to Byzantine silver gilded vases produced by Constantinople jewelers in the AD 4th–5th centuries and found at Zhyhailivka Village in Trostianets District. One of them is decorated with a plant inlaid ornament while another one is supplemented with a bas-relief showing an Iliad episode by Homer.

This exposition is accompanied by a permanent exposition called Slavonic Ancient Reminders from Sumy Region where one can discern many valuable exhibits revealing a Slavonic ethnogenesis history. Among them there are garments from the 4th–century Sumy women’s burial place which were used in the Goths exposition (Milan, Italy, 1994).

The medieval history is represented by materials from excavations of Old-Russian and annalistic towns — Putyvl and Vyr. An extremely valuable exhibit is a handwritten book with legislative and judicial acts that were valid in the Ukraine of the 16th–18th centuries. Among them there is The Lithuanian Statute — a collection of the 16th-century feudal laws which is a famous law reminder from Grand Duchy of Lithuania.

Unique documents, a 17th-century coin treasure found in Sumy, 16th-17th-century weapons, blown glass, tribal relics of Ukrainian Cossacks’ foremen as well as materials dedicated to battle of Konotop (1659) represent the Cossack Age in Sumy Region. Originality is also revealed by such exhibits as B. Khmelnytskyi’s and V. Kochubei’s portraits of the 19th-century beginning, a 17th-century flask belonging to Hetman Ivan Samoilovych (as a legend says), a 1681 Gospel black letter with sewn handwritten documents pertaining to the saint Dymytrii Rostovskyi (Tuptalo), a prior of the Pertopavlivskyi monastery in Hlukhiv. Attention is also attracted by fitting boards from the Refectory Church of the Assumption of the Holy Trinity convent in Hlukhiv, which was built with the assistance of the Mother Superior Mary Magdalene Mazepa (Ivan Mazepa’s mother), by wooden elements of the Holy Trinity Church built at the expense of P.I. Kalnyshevsky, the last Zaporozhian Sich ataman, in his homeland — the village of Pustoviitivka in Romny District.

Economical and cultural development of the 19th-century settlements is characterized by products of local artisans, household items and documents. A particular interest sparks a 1691 treasury box for guild coffers, a guild’s flag of butchers in Lebedyn, exquisite dishes of the Volokytynska porcelain factory that worked in the mid-19th century.

Everyday things, rare documents, books, 17th-20th-century icons, the best examples of 19th-century weapons are represented in a separate museum hall. This exhibition thematically continues large-scale museum indoor exhibition called The 20th Century Is Beginning, which is devoted to the middle class at the turn of the 19th and 20th centuries. Furniture, dishes, clothes, original photos and documents are represented here.

A separate exhibition Material Culture and Life of Sumy Peasants at the End of the 19th-20th Centuries recreates peasants’ hut interior, tools and products of rural artisans, folk costumes, household items, photos and icons. A rare exhibit is a wooden forged box with a Latin inscription ANNO 1714.

Numerous visitors also like visiting an exhibit hall dedicated to the history of Sumy Region during the Second World War. A considerable variety of material tells about participating of region natives in 1941-1945 combats. 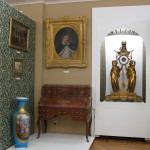 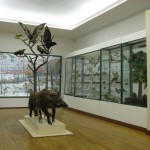 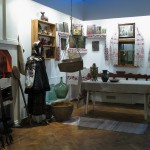 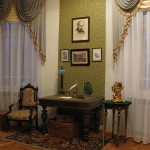 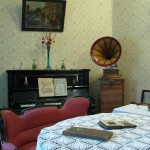 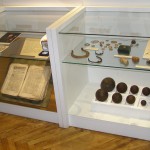 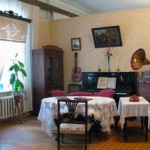 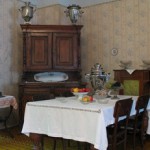